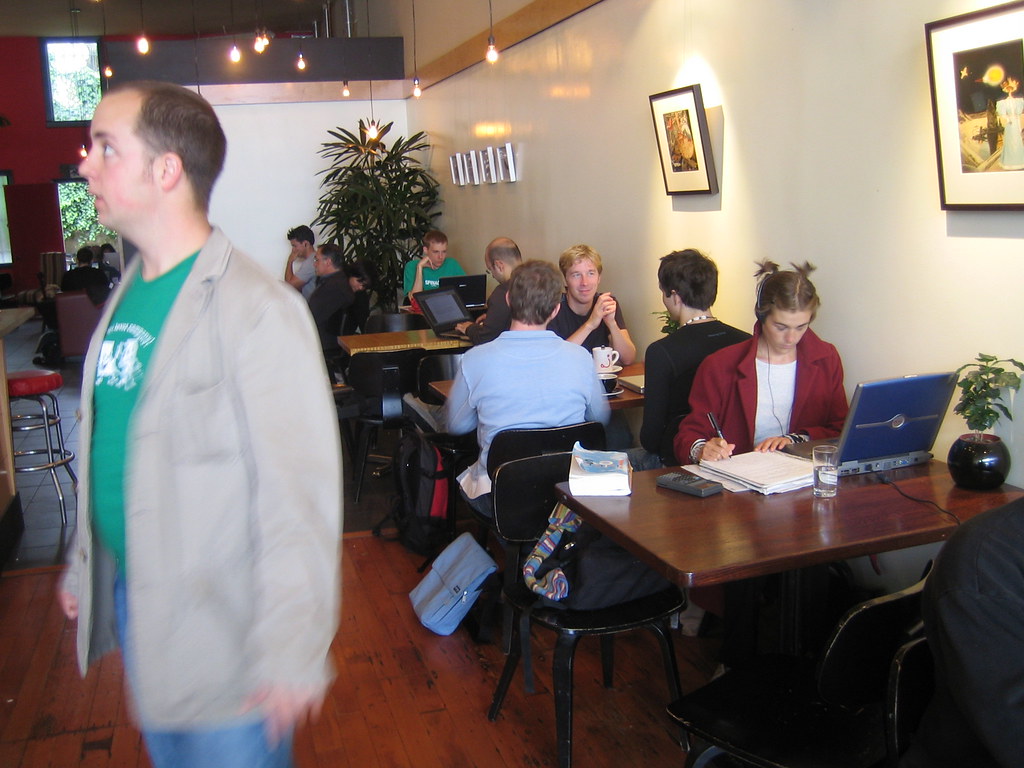 Ryan King, Matt Mullenweg, Chris Messina, and Andy Smith at Ritual Coffee Roasters on Valencia Street, San Francisco, 2005-08-13.*Several virtual co-planners and infrastructure crew came on board within days and were essential to making the first BarCamp happen: barcamp.org/BarPlanners.By (current) URL as we all did back then in the days BT (Before Twitter)* kevinmarks.com (@kevinmarks)* canonical.org/~kragen (@kragen)* bookmaniac.org (@lizhenry)* rebelmouse.com/kk (@kk)* ross.typepad.com (@ross)* jluster.org (@legerdemain)* progrium.com (@progrium)* billsaysthis.com (@billsaysthis)* dweek.ly (@dweekly)* laughingsquid.com (@laughingsquid)And for reference, here is the first BarCamp's sign-up page, see who you recognize:* http://barcamp.org/BarCampersYou should all be very proud of what all of you collectively created 10 years ago in the six days of planning and 2-ish days of BarCamp itself.10 years and 1000s of BarCamps later, the barcamp.org site (a wiki) is still being used to organize them worldwide and direct people to separate independent BarCamp sites as well (like barcampnashville.org — going strong since 2007) independently of any of the founders or original planners. Organic growth beyond anyone’s expectations or wildest dreams.I remember at the closing session remarking how maybe we’d do a second BarCamp the next year. It was not to be, because others couldn’t wait to organize the second, and third etc. BarCamps on their own.Only a few of the individuals who participated in the first BarCamp helped with the immediately subsequent camps, both facilitating and spreading the cultural seeds of BarCamp. Hat-tips to Chris Messina (@factoryjoe at the time) & Andy Smith (@termie), and Amit Gupta (@superamit) in particular for Amsterdam and New York City, the second and third BarCamps respectively.They were able to because we had documented everything about BarCamp on an open wiki on the web (no login needed to view, searchable, and search-engine friendly). We had opensourced the very processes (the human “software”) of running a BarCamp, which meant that anyone could create and run one, experiment with variants, and contribute improvements. We had shipped an opensource implementation of the Freedom of Assembly and didn’t even realize it at the time.Previously:* tantek.com/2013/225/t1/eight-years-ago-barcamp-ritualcoffee* tantek.com/log/2006/07.html#d10t0805*Note: Ritual renovated in the past couple of years and looks nothing like the above photo any more, but you can still find tons of photos of the classic Ritual Coffee Roasters on Flickr: flickr.com/photos/tags/ritualroasters/interesting/